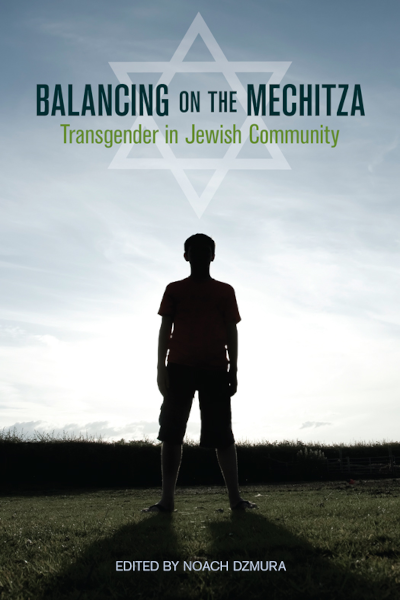 Balancing on the Mechitza - A review

In writing a recent post about being welcoming to trans folks on Babka, I wanted to understand the issues of trans Jews as much as possible. While I know many trans folks, and many Jews, I know only a handful of trans Jews. Thus, in order to gain a greater understanding of the transgender Jewish experience, I read, or rather I listened to the audiobook of “Balancing on the Mechitza”, a collection of stories and essays by and about trans Jews.

This review is not a critique. As a cis person, the lived experience of these trans and otherwise non-gender conformist Jews is outside of my own lived experience, nor do I have the experience to know whether the experiences or views of the authors of this collection represent trans Jews as a whole. Instead, I am reviewing the book from my perspective as a cis man and someone who hopes to make a welcoming space for Jews of all gender expressions.

The book is substantial. I am not talking just about its length, though it is nearly 300 pages, but more that the essays were substantial, heavy, and reading them left me with thoughts and questions that lingered afterwards.

I was struck at first by the language used in the book. Balancing on the Mechitza was published in 2009, and likely many of the essays were written in that same year or a bit earlier. That’s only a little over a decade ago, and yet the writing seems from a bygone age, when transgender vocabulary itself was “unbaked” in our societal understanding. Terms like “transsexual”, complicated balancing acts around pronouns and even the need to write “female to male” when talking about trans men seems to be from a long ago and pre-enlightenment age.

At the same time, the essays feel intensely present. It’s hard to summarize a variety of essay with one fell swoop, but the vividness, power, and immediacy of some of the essays made their situation not only understandable, but almost tangible.

I must admit that sometimes listening to the essays, beautifully read by Dana Levinson, my thoughts sometimes began to drift away from the subjects of the essays. I’ve never had gender dysphoria, but I do recognize the deep sense of longing for self and belonging, for not feeling that I fit in, or feel accepted- those are feelings I am all too familiar with, and like some of the essayists, as I’ve gotten older, I’ve turned to my Judaism to help me make sense of the world and give it order.

Returning to the review, the essays ranged in style and subject, from deeply personal snapshots in time, to explanations, to theological explorations of Judaism’s response to gender, philosophical and linguistic explorations of gender and gender transition- more and everything in between.

The voices that speak in this book speak loudly, clearly, and with heart. Even the editor, Noach Dzmura, who appears in the beginning and occasionally prefacing certain chapters, feels like a personal guide through the stories, explanations and analysis. I can’t help but be drawn into the experience, maybe fueled somewhat by Dana Levinson’s incredibly heartfelt reading. The book captures something special, something fundamentally Jewish, not merely in topic, but in spirit.

Most writings about Judaism’s spirituality miss the mark for me. The author either talks about the physicality- the immediate present, or they talk about their transcendence in a way that I can’t connect with. Balancing on the Mechitza has essays that bring me along with the author through their angst and transition in a way that brings the reader along with them and helps them feel both the immediacy and the deeper experience. These spiritual experiences always have a tinge of angst or sadness, something that may be common in both the Jewish and trans experience. Even the discussion of language, or of ritual feels spiritual and beautiful, in an incredibly and unabashedly Jewish way.

I have a lot of trans and otherwise non-gender conformist people in my life, and while I’ve heard their stories and even sat beside them when they cried, as a cis person I can never fully understand their experience. In the book, some of the authors talk about their gender identity as being as core to their knowledge of self as their Judaism. Even those Jews who converted speak of knowing it in their soul. This is something I can relate to deeply.

I also relate to the feeling of not fitting in and being the outcast. I know what it’s like to feel profoundly out of place. Maybe that’s the best a cis person can do in understanding the trans experience, but Balancing on the Mechitza has helped me understand it just that much more, and made the experience that much more accessible.

I was unable to find any site selling DRM-Free copies of Balancing on the Mechitza as an E-Book, but you can find it in regular bookstores.

Or you can do what I did and buy the audiobook via Libro.fm here.